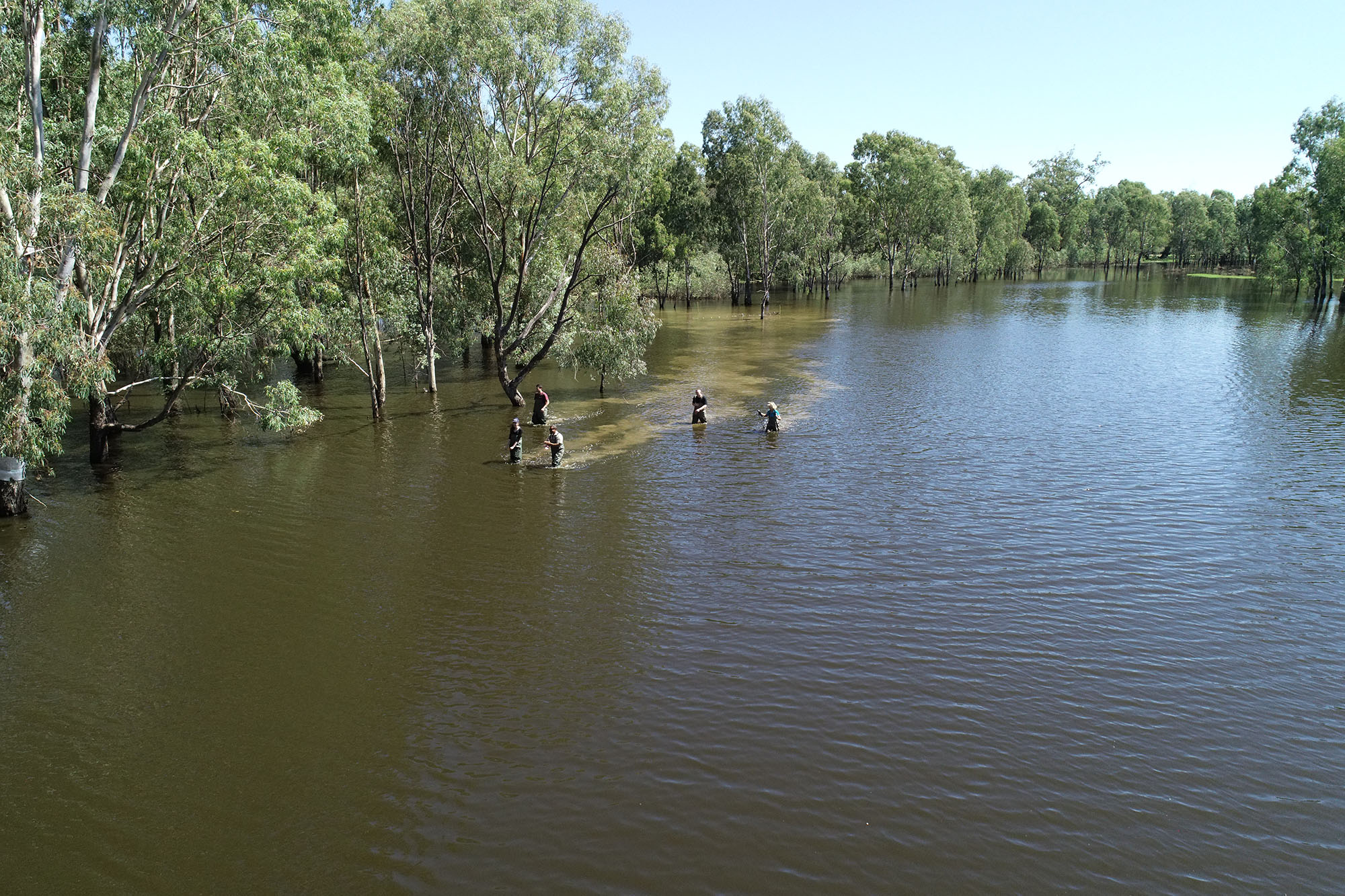 Pumped – how flows are revitalising fish, frogs and flowers at Sunshower Lagoon


Australian wetlands are home to a variety of native fish, frogs, birds, freshwater turtles and aquatic plants. Wetlands provide their inhabitants with food, shelter, and a place to raise the kids – but they can also be a daunting place to live. Imagine a small native fish vastly outnumbered by a large predatory introduced species competing for food and habitat. Life would be pretty tough!

The loss of natural wetting and drying intervals

Many wetlands naturally undergo wet and dry periods. Water in-flows trigger widespread delight amongst resident fish, frogs and turtles, and migratory birds start to show up. Things get busy with frog and waterbird breeding activity, and native fish movements to and from connected river systems. It’s a bit of a race to maturity and survival as water levels recede. The dry periods are also important, with many plants and animals dying, decomposing and contributing nutrients to the soil. Others rest quietly as eggs and seeds, ready to spring to life with the next flood. 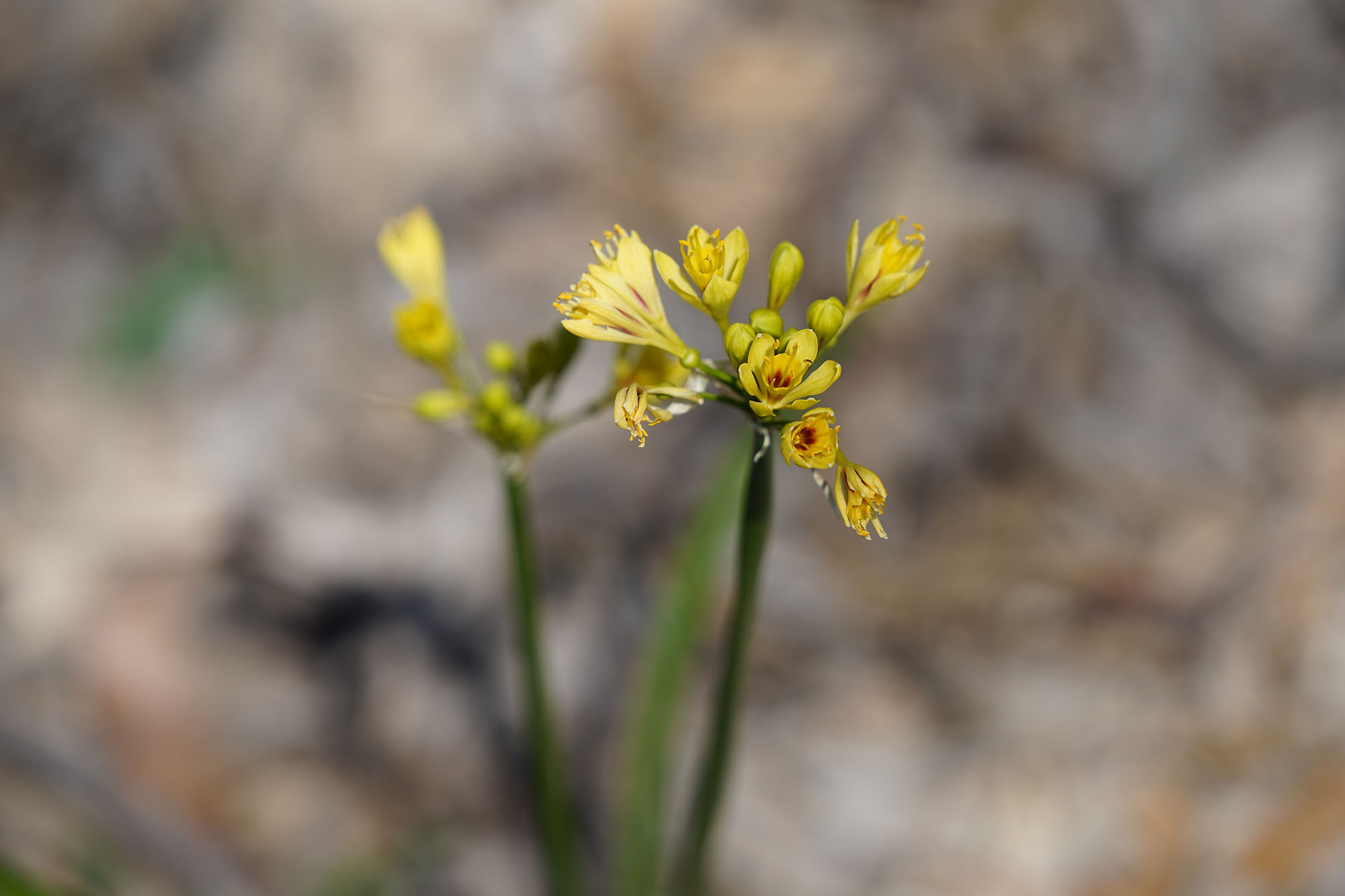 Drought, river regulation and water use have reduced the frequency and size of natural flood events that used to regularly inundate many wetlands. Natural wetting and drying intervals have been altered, and water for the environment has become vital for wetland health.

Water for the environment can be delivered in a few ways including overbank and reconnection flows, and via pumps. Pumping uses pipes and machinery to directly target high priority wetlands and does not need high water levels for delivery. Although overbank flows and river to wetland connections are important, the volumes of water required are not always available. Pumping can make use of limited water volumes and makes adding screens or filters easy – preventing access by large introduced fish species such as European carp, Redfin perch and European goldfish.

Sunshower Lagoon is one of a series of oxbow lagoons that occur along the Murrumbidgee River between Wagga Wagga and Hay in southern New South Wales. 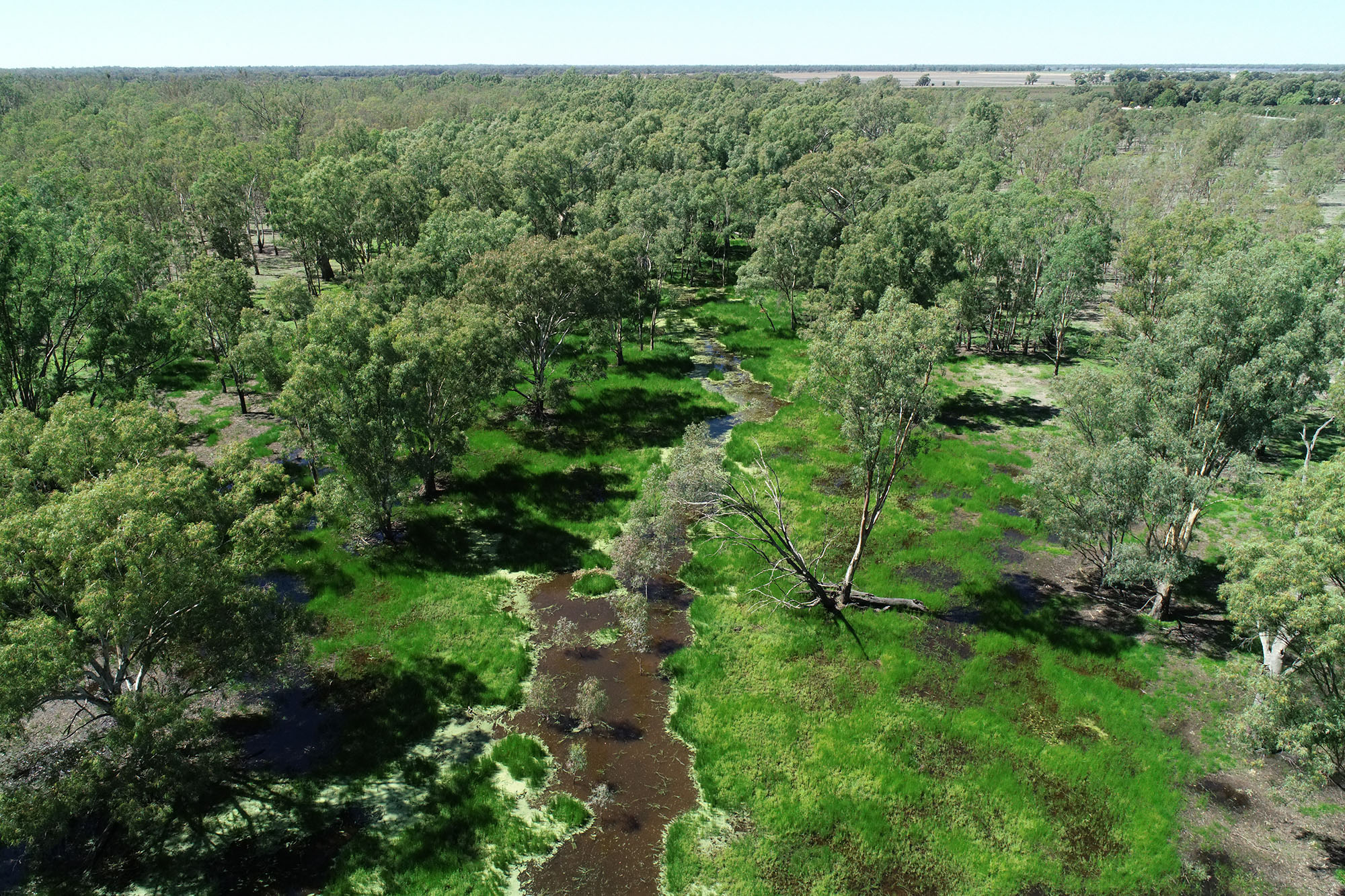 Before the Millennium drought (2000-2009) these wetlands would fill from the river pretty regularly, but during and after the drought, low water levels coupled with high water demand resulted in some wetlands experiencing prolonged dry periods.

Since 2010, Sunshower Lagoon has filled during three natural floods, which were boosted with water for the environment (2010, 2012, 2016). Most recently, a managed river to wetland reconnection filled the wetland in August 2017, with water lingering until February 2018. These natural and managed floods had the desired results, including increases in the number of aquatic vegetation species and tadpole abundances. 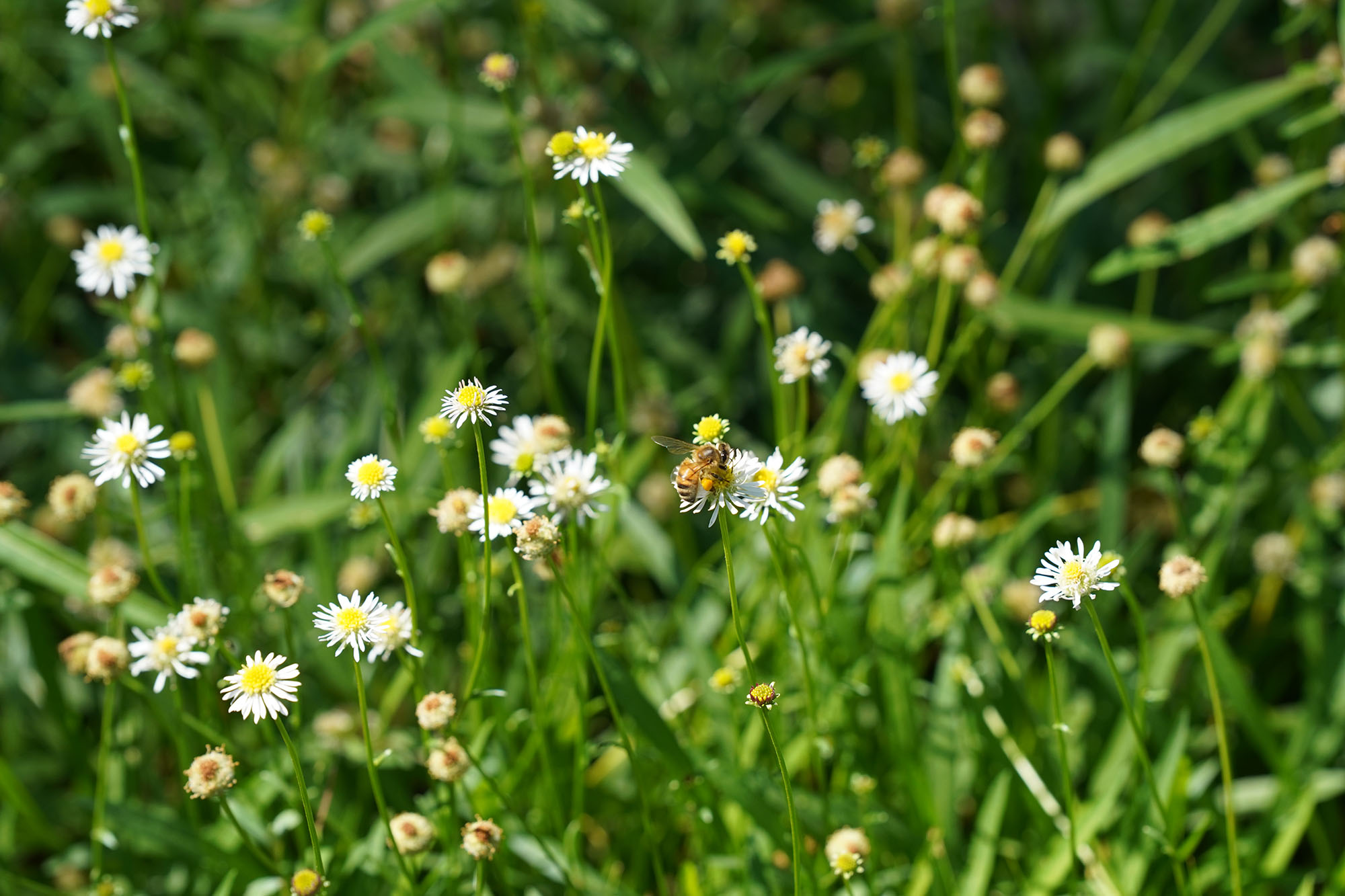 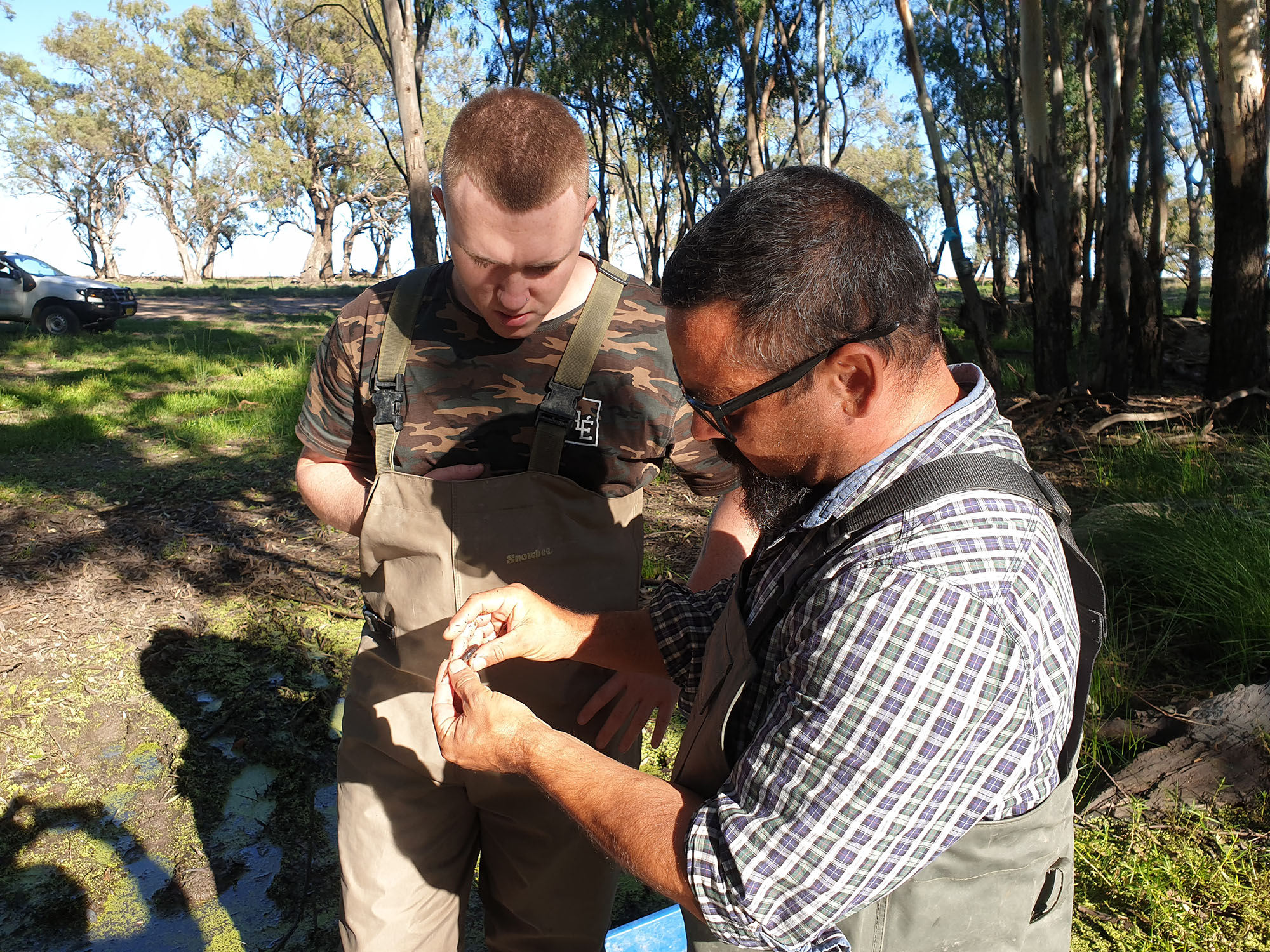 Unfortunately, this also allowed large numbers of adult carp to enter the wetland from the river. Large numbers of carp can be bad news for wetlands, where they can affect water quality, damage native vegetation, prey on native fish and frog larvae and compete for food and shelter.

Given its location close to the river, installing a stretch of connecting pipe was a clear solution. Sunshower Lagoon received its first pumped flow in December 2019. The lagoon was filled by pumping water from the river through pipes screened to block large carp but perforated with small holes to allow access by small fish. 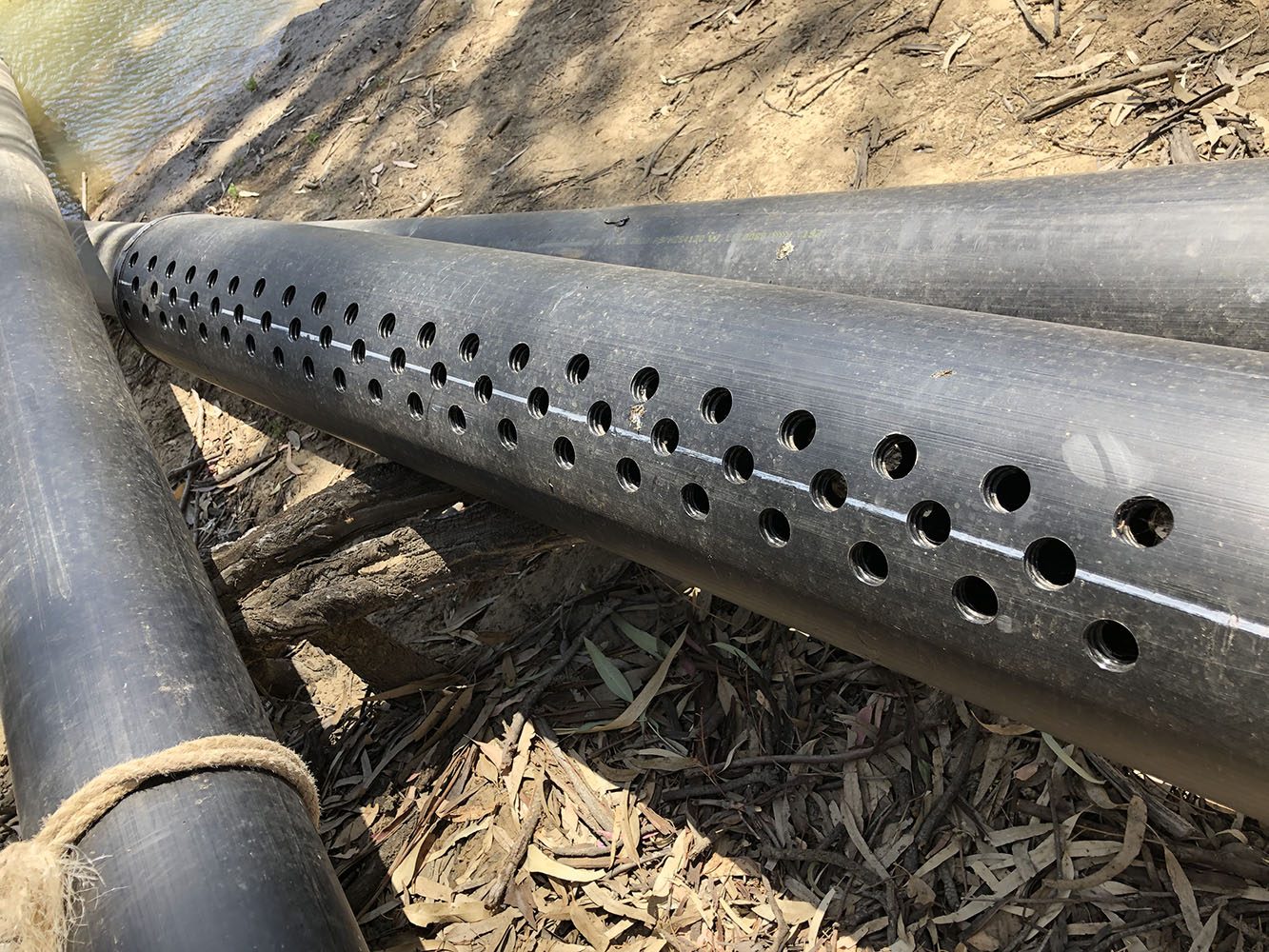 The initial response has been positive with great vegetation regrowth, an explosion of tadpole numbers and the return of vulnerable southern bell frogs – heard calling here recently for the first time in ten years. Long-necked turtles have also made an appearance and, while we are yet to detect small native fish, our hopes are high for future field surveys. 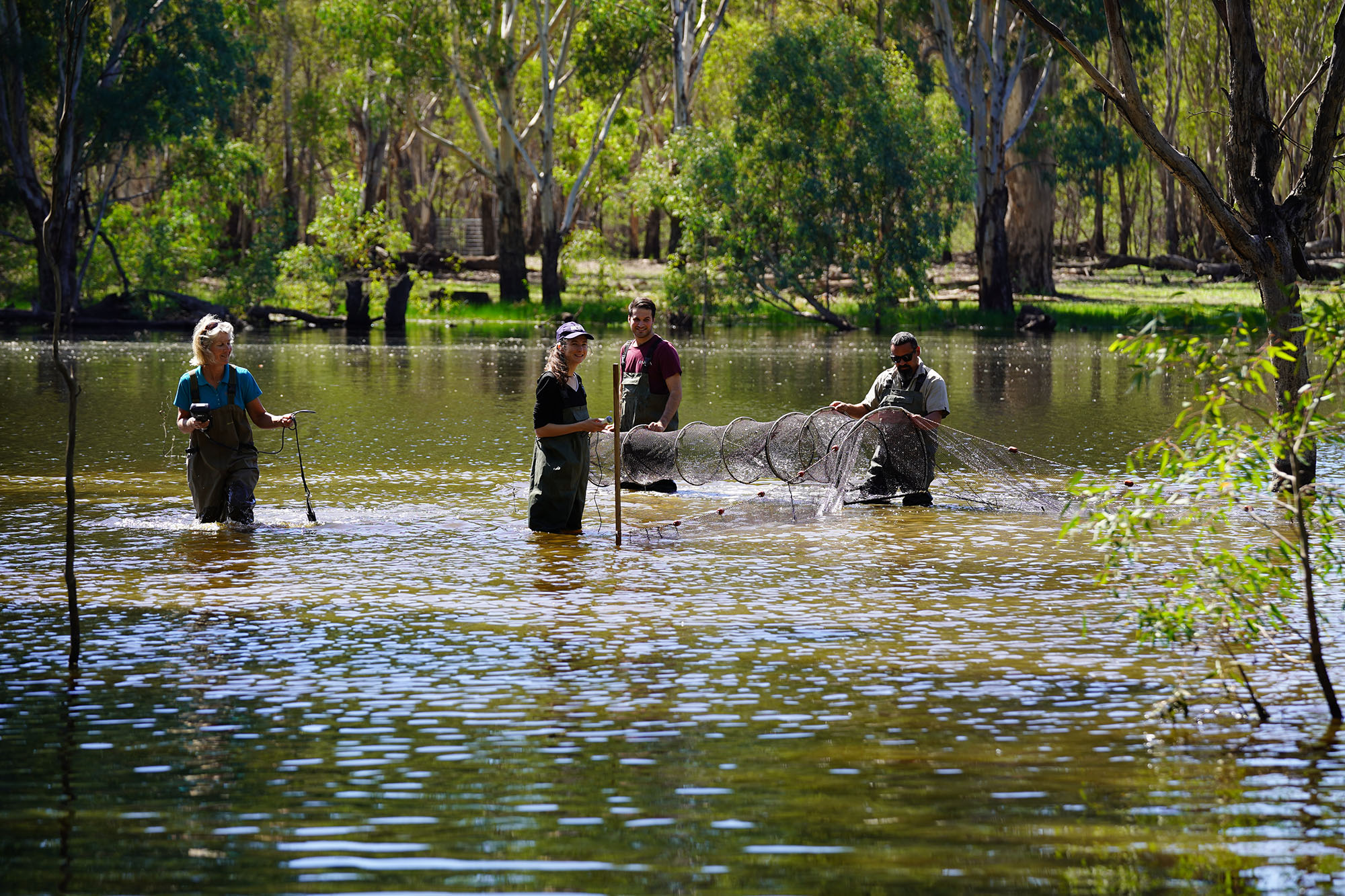 It is thought that excluding large carp will allow small native fish to thrive and successfully compete with any juvenile carp that do gain access. Native plant species also benefit from clearer waters and reduced damage, increasing the variety of watery habitats for fish, frogs, turtles and birds. 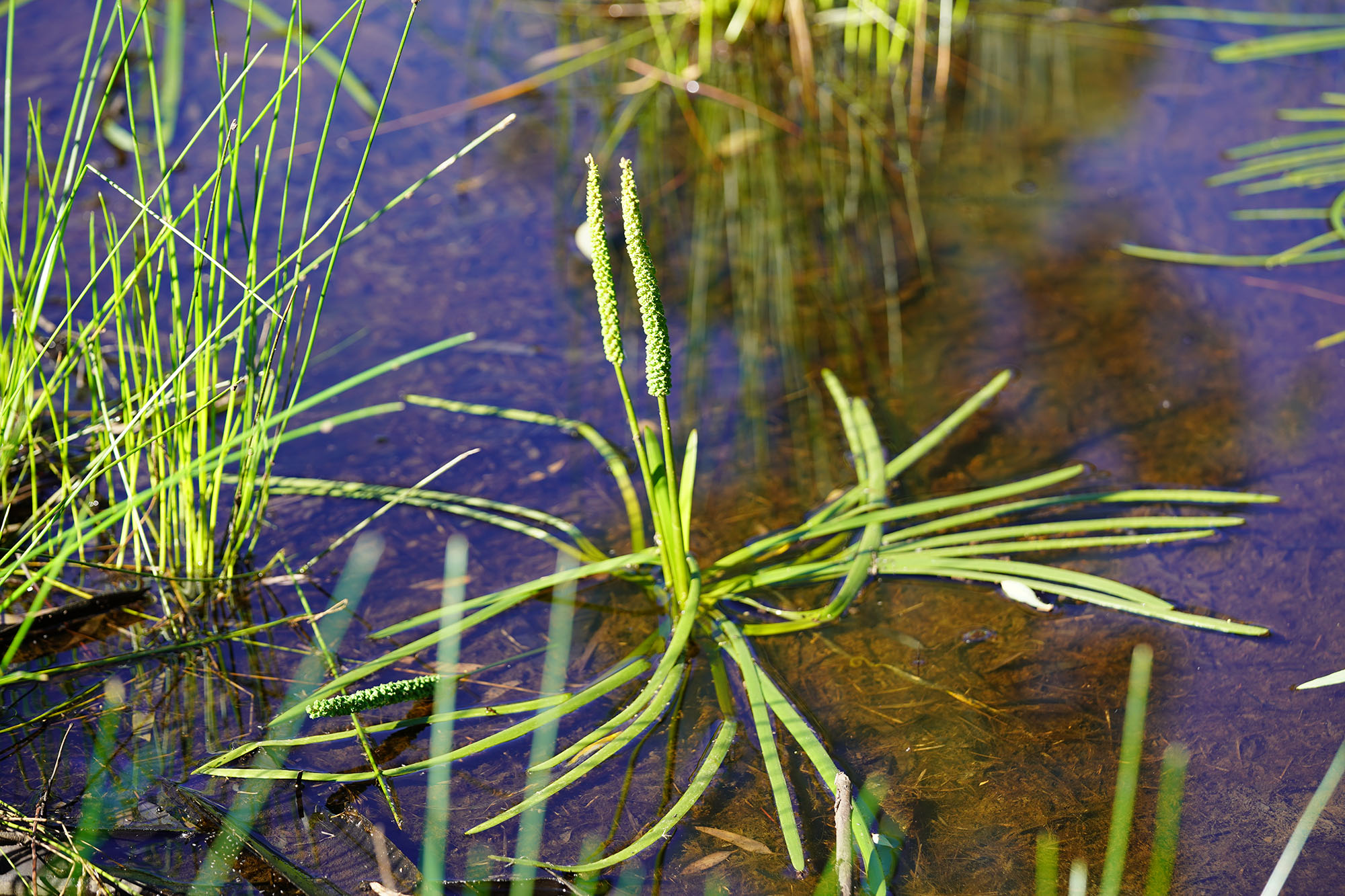 It’s still early in the rehabilitation process for Sunshower Lagoon, but the return of southern bell frogs after almost a decade is definitely something worth croaking about. 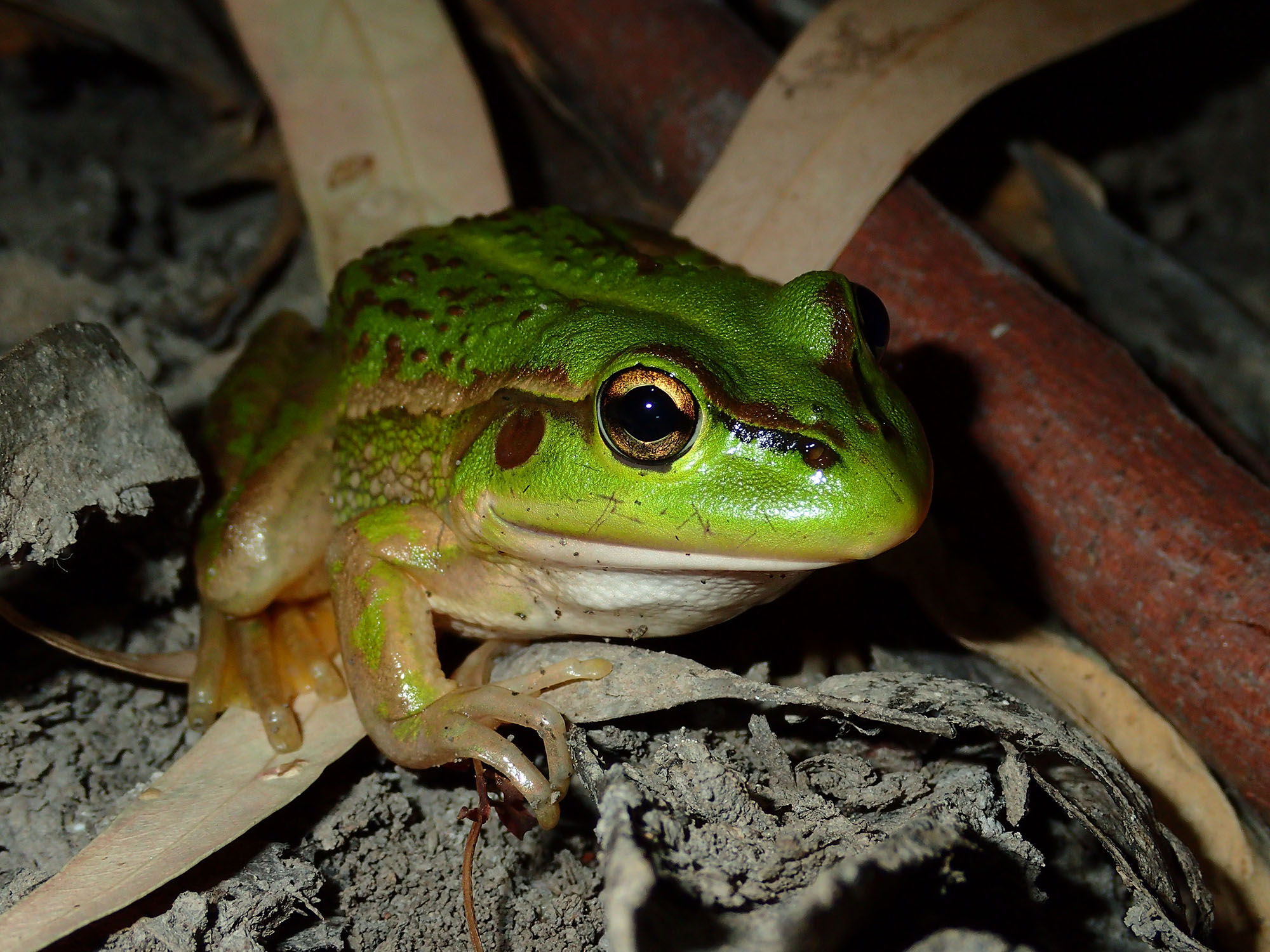 The Murrumbidgee is a lowland river system with large meandering channels, wetlands, lakes, swamps and creek lines. Our work here focuses on understanding how native fish, waterbirds, reptiles and amphibians, as well as wetland vegetation communities, benefit from these targeted environmental watering actions. 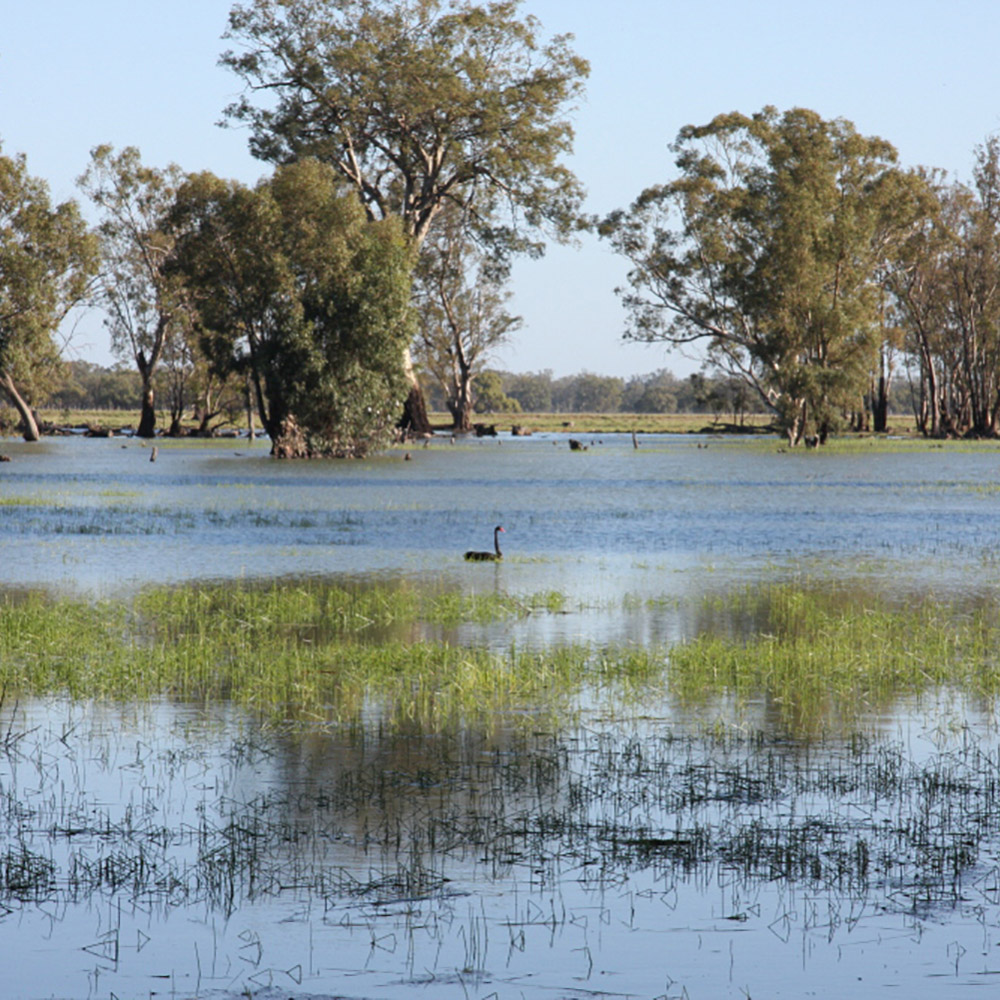